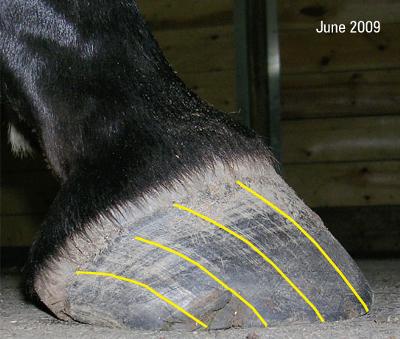 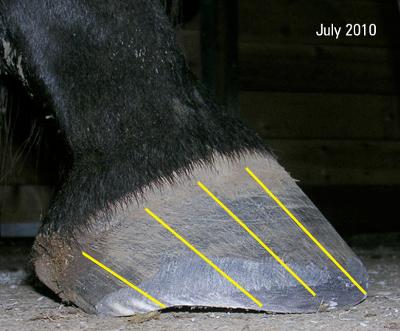 Here are a couple of pictures to illustrate how poor trimming can lead to bent hoof tubules.


The first picture shows a hoof that was being trimmed every five weeks by a traditional farrier. This hoof had been allowed to distort, with the heels running forward and too low in conjunction with the quarters being left too long. Notice how the hoof tubules (the lines that run from the hairline to the ground) are bent.

This leads to a very weak structure as the hoof tubules are similar to drinking straws in that they have strength but only when straight. If you take a drinking straw and hold it perpendicular on a flat surface and put weight on the top of the straw it will withstand a fair amount of pressure. Now take the same straw, bend it and then try the same thing - it now cannot withstand hardly any pressure.

The second photo shows the same hoof a year later, after receiving 12 months of barefoot trimming. Notice that the tubules are all now straight and the heel is more upright and further under the hoof. Also the toe wall has lost the slight bulge that it used to have previously.

This horse has an advanced case of DSLD (Degenerative Suspensory Ligament Desmitis) which makes having correct hoof form even more important. The original underrun heels put added strain on her already sore suspensory ligaments. Correcting her hooves was made more tricky due to the DSLD but shows how it is possible to reverse this issue with a physiologically correct trim.